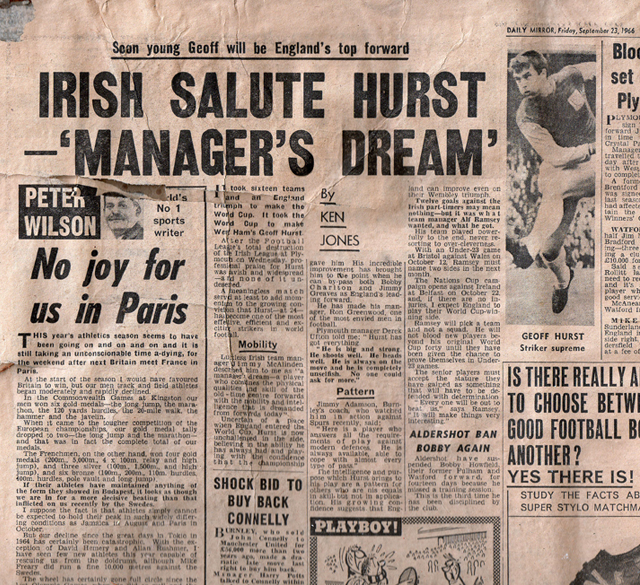 Look what gets brushed under the carpet!
Source: Daily Mirror
By: Jacqueline Alexander

Clearing out an old cottage, it was a huge surprise to find Sir Geoff hiding under the carpet! As we pulled up the old and dusty rug, there, stuck to its reverse side, was a page from the Daily Mirror published on 22 September, 1966.

The article tells of Sir Geoff's skills, his post World Cup confidence and the widespread praise of his game.

"Hurst has got everything," says Derek Ufton, manager of Plymouth. "He is big and strong. He shoots well. He heads well. He is always on the move and he is completely unselfish. No one could ask for more."

With the carpet still attached to the newspaper, it has now been scanned and given a new home here on Sir Geoff's website. Click below to download a larger image to read the full article.

On the day after his hat-trick made history, when every reporter and photographer wanted a piece of Geoff Hurst, they went round to his house and there he was, mowing the lawn. Yes, the day after! [read more]

It wasn't until the celebratory banquet that evening that Hurst realised he had scored a hat-trick, assuming that the final whistle had been blown before he'd struck the ball into the net for his third goal. This meant he had not attempted to get the match ball as a souvenir, which hat-trick scorers traditionally do. Haller, scorer of the Germans' first goal, acquired the ball and was seen holding it as he collected his runner's up medal. He returned it to England... more than 30 years later. [read more]

While his wonder save against Pele in the World Cup ranks as his best, Gordon Banks has consistently felt his save in a League Cup semi-final second leg at Upton Park in December 1971 was his most significant.
It was a penalty save in the dying moments of extra-time which, had he failed to make, would have seen Stoke exit the League Cup and never accomplish that famous Wembley win over Chelsea some three months later.
And who should step up to take the penalty? None other than his 1966 World Cup-winning colleague, Geoff Hurst.
"Geoff had taken a penalty in the first leg at Stoke and I had pushed it into the side of the goal. This time, I gambled he would send it the same way - and he did.
"I shoved my hands into the air and put the ball over the bar. Stopping Geoff was special and it was the first penalty he'd ever missed." [read more]

Sir Geoff Hurst MBE secured a unique place in the history of football in 1966 when he became the first and, over 55 years later, still the only player to score a hat-trick in a World Cup Final.